At the beginning of the 18th century the male silhouette differed greatly from that of today. A typical outfit consisted of a full-skirted knee-length coat, knee breeches, a vest or long waistcoat (which could be sleeved), a linen shirt with frills and linen underdrawers. Lower legs showed and were an important part of the silhouette. Men wore silk stockings and leather shoes with stacked heels of low or medium height. The whole ensemble would have been topped by a shoulder-length full-bottomed wig and a tricorne (three-cornered) hat with an upturned brim.

As the century progressed, the male silhouette slowly changed. By the middle of the century the wig was usually tied back (known as the tye or bag wig). By the end of the century it was out of fashion altogether except for the most formal occasions. Undergarments and knee breeches did not change very much. Coat skirts gradually became less full and the front was cut in a curved line towards the back. Waistcoats became shorter. The upper leg began to show more and more and by the end of the century breeches fitted better because they were often made of knitted silk. Shoes became low-heeled with pointed toes and were fastened with a detachable buckle and straps or ribbon on the vamp (the upper front part of a boot or shoe). 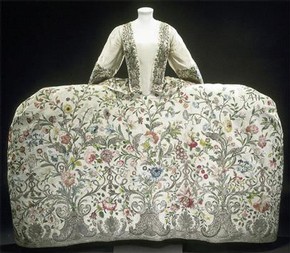 Mantua or court dress, silk embroidered with coloured silk and silver thread, England, 1740-45, Museum no. T.260-1969In the early 18th century women wore a dress known as a mantua for formal occasions. The mantua was an open-fronted silk or fine wool gown with a train and matching petticoat. The train was worn looped up over the hips to reveal the petticoat. The bodice had loose elbow-length sleeves finished with wide turned-back cuffs. A hoop petticoat and several under-petticoats wore worn beneath the outer petticoat.

To give the figure the required shape a corset was worn under the bodice. It was made of linen and stiffened with whale bones inserted between parallel lines of stitching. They fastened with lacing down the back which could be laced tightly to give an upright posture to the torso and to emphasise the waist. A ‘busk’ or strip of bone, wood or metal was sometimes incorporated into the front of the stays.

Hair was worn close to the head with a small linen cap which sometimes had lace lappets, streamers that hung
either side of a woman’s cap. The cap was covered by a
hood or hat for outer wear.

In the 1730s the ‘sack back’ dress worn over a hoop petticoat became increasing fashionable. It remained in fashion until the 1780s. The sack back was made from five or six panels of silk pleated into two box pleats at the centre back of the neck band. It flowed down and was incorporated into the fullness of the skirt. It was worn over a matching petticoat as well as a hoop petticoat. The ‘nightgown style’ or style anglaise had a pleated back. The pleats were stitched flat from the back of the neck to the centre back waist.

Hoop petticoats were usually made of linen with split cane hoops stitched in at intervals and held the skirt of the petticoat and the robe out at the sides. They were at their widest in the 1740s and 1750s when they could measure over 1.5m across. Hoop petticoats were worn on formal occasions. As with many fashions, it is hard to say why such a cumbersome outfit was popular. One reason might have been that it displayed the richly embroidered cloth of the skirt that indicated the wearer’s wealth.

During the 1770s hair styles became higher, as they were combed over a padded roll or worn over a frame.

Between the 1780s and 1800 a very noticeable change took place in the female silhouette. The waistline became higher until it reached the bust. The skirt was reduced in width and hoop petticoats were discarded except at court. In their place crescent-shaped pads were worn at the centre back waist beneath the skirt to help fill out the gathers at the back of the dress. In the 1790s corsets were lightly boned and usually made of linen. Hair was frizzed or worn in short curls.